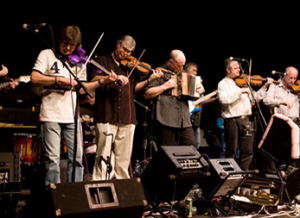 Feast of Fiddles is a musical extravaganza covering almost every genre and involving quite a few fiddles! It’s not just folk, it’s not just fiddles it’s an entertainment.

20 Years and still going strong and every friend and guest dragged along an immediate convert. If you love live music, come to the feast – you won’t be disappointed!

Here’s a review from 2009 by the late eminent composer and Marlborough resident David Fanshaw.

‘Thank you Feast Of Fiddles for one of the most enjoyable concerts I have ever attended; and in Marlborough Town Hall too – my home town!

Your imaginative programme was riveting from start to finish.  I relished the brilliance of tone colours in all sections; the violins soaring away, like the spring in the bow of an arrow, on an effortless flight path in perfect unison – like the first violins of a very great symphony orchestra – yetbetter, because of your innate musicianship, conductor-less craft, rhythm and palpable love of the many genres of music making you had to offer.   You are seriously all great musicians.

These genres included: ‘Folk’, ‘Folk-rock’, ‘Classical’, ‘Pop’, ‘Jazz’, ‘Electronic’, ‘Film and TV’ amongst others.  Every member of your extraordinary band is a virtuoso; all are composers / arrangers.  I therefore salute you, eleven musical wizards; and your diligent, highly skilled sound engineer Paul Smith (the mix was perfect).

Congratulations to Maestros Phil Beer, Brian McNeill, Chris Leslie and Hugh Crabtree  (melodeon) who galvanised you all on vocals, Ian Cutler, ‘Uncle’ Tom Leary, Peter Knight, whose improvisations were mind-blowing, Dave Mattacks, the quintessential creative drummer (Gov!), Dave Harding, John Underwood and Martin Vincent (guitars) whose playing lent such support to the band, always subtle and with some ravishing solo work.  I particularly loved the James Bond Theme, what an original arrangement; as was the Magnificent Several, and so too the Dambusters March – Eric Coates would have been amazed – Feast Of Fiddles style!

So, come back to Marlborough next year and Blow-us-all-away-again, “Bravo!”

I wish you continued success on this your spring tour 2009.  I also wish we could see you performing on BBC TV, with Jonathan Ross and Jools Holland – you deserve it.’